An October Daye novel #2
A another reread for this year’s OUaT challenge, originally read for the Once Upon a Time VI challenge

October Daye is a changeling. Her mother is Amandine of the Daoine Sidhe, and her father was a mortal man. She works as a private investigator but she also a knight for her liege lord. And he has asked her to go check up on his niece. She is the Lady of a small Country known as Tamed Lightning, which makes this a politically sensitive job. Small countries don’t tend to do too well in faerie, bigger and more powerful entities usually gobble them up, and Lord Sylvester doesn’t want to provoke a diplomatic incident with Dreamer’s Glass. 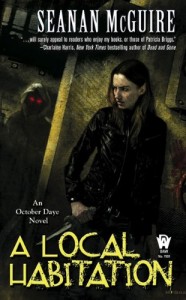 A local habitation by Seanan McGuire

This is the second book in the series, and while it certainly does help to have read the first I think you probably could read this without getting too confused. Toby did learn lessons in the first book, and there is a background story that a reader might like to know, but it isn’t essential.

This is easily as good as the first, if not better, as I said after reading Rosemary and rue, Toby is just a great character.

Of course she makes mistakes, and I am sure there is at least one character who may as well be flashing giant warning “Stay Away” signals at the reader, a fact that Toby doesn’t seem to pick up on until too late, but usually her flaws and mistakes are understandable and human and fit the character. This is an important thing as she is the narrator as well as the protagonist, so if you don’t identify at least a little with her I would guess the story will fall a little flat.

The first book in the series dealt with Toby reacquainting herself with the world after being absent for 14 years. Now, while she still has some adjusting to do she seems to have found her niche again. This book is more of a straight-forward detective case, albeit one with faery and magic and the like.

I’m very tempted to dive straight into book 3 of the series, because I have it here on my bookshelf waiting for me. But I don’t want to overdose on Toby, I like the anticipation of knowing that I have a good read coming up, so I think I’ll leave it for a book or two :)