Emperor Rudolf II - Ruler of the World, Aficionado of Alchemy, Collector of Curiosities - shifted in his throne.
–Joanne Owen - The alchemist and the angel - c.2010 - pg 9

Jan lives with his aunt and uncle. His parents died of the plague and he had to leave his home village and move to Vienna. At first he is, understandably withdrawn and upset, but after a few months his uncle suggests that he help out and become his apprentice. At once Jan begins to perk up, maybe he can become an alchemist doctor and help to cure people suffering from the plague. 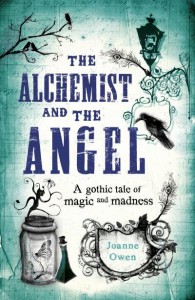 The alchemist and the angel by Joanne Owen

I loved the design and layout of this book. The main story is interspersed with drawings and other tales which fill out the world Owen has created. The main plot itself, revolving around Jan, promised a lot more than it delivered. It felt thin and lacked the detail that would have brought it to life for me. It felt, in many ways, almost like an outline of what would happen. It is a huge pity, because this could have been a really great book.

It is, in many ways, a predictable story. You know from the outside who is going to turn out to be the *bad guy*. Actually, it was really unfortunate that that particular character was the black hat, because I found that particular character the most interesting of the bunch. And in the beginning I had quite a lot of empathy for them. I mean, you could really understand their frustration and annoyance at always being left to one side.

Still, even with those negative aspects, I did enjoy this book. I read it almost in one sitting, and there were some lovely little touches that really made me like the book. I’ll be certain to keep an eye out for more by this author in the future.

Other reviews: Chicklish ; If you have read & reviewed this let me know and I’ll add a link.< ?p>