Book 3 in the Uglies series.
Read for the Not just for Stormtroopers sci-fi challenge & the 2012Science Fiction Experience.

At some point in the future a biological oil-eating weapon brings about the end of civilisation as we know it. But in the aftermath a new society emerges. In the US different cities states emerge. Each with their own rules, cultures and lifestyles. Tally lives in one such city. In Uglies, the first book in this series, we were introduced to Tally and to her city. Where once you turned sixteen you left behind your ugly self and were enhanced and became a pretty. Tally was the last of her group to turn 16, and while waiting for her operations she met a new friend, Shay, who told Tally about the Smoke, and how people lived there without becoming pretty

Since then a lot has happened. And I won’t go into it, because *spoilers*, but suffice to say that there was plenty of action and twists and turns along the way to this, the third book in the series. 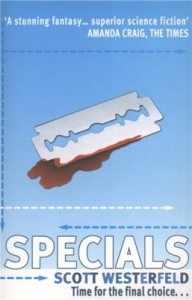 I liked the first two books in this series. I wasn’t blown away by them, but I did enjoy them. This, I think, was the best of the bunch. It was much more of a page-turner than I remembered the first two, and it zipped along, with barely a moment to slow down. I certainly wasn’t bored reading it.

I’ve really come to like Tally through this series. And I liked that the love triangle aspect was played down a lot more in this book, it was all about Tally finding out who she really was. And yes, there was a bit of romance, but only as much as the reader wanted to put in, it wasn’t in your face when you were more interested in other aspects of the plot. It made sense. Which is a huge relief. Love triangles are just so boring to me at the moment.

This was more about tally and her friendship with Shay. They are both a lot different than they were in the first book, for a lot of reasons, but I liked the new them. And the new new them :)

Other reviews: The written world ; Books and movies ; A good stopping point