Ever since Katniss’ father died in a mining accident she has been the one to take care of her family. Her mother’s depression left her unable to care for either of her daughters, so Katniss took the role on. Katniss is the protector, and so, when her younger sister’s name gets picked out during the “reaping” she immediately volunteers to take Prim’s place. The reaping, you see, is how the capital punishes the other districts. Long ago the thirteen districts rebelled against their capital. But they lost the war, and the remaining 12 districts are kept separate and divided, and “in their place!” And every year each district must provide two teenagers, one boy, one girl. These teenagers are then taken and forced to battle each other, to the death, on television that is often compulisve viewing, until only one remains. 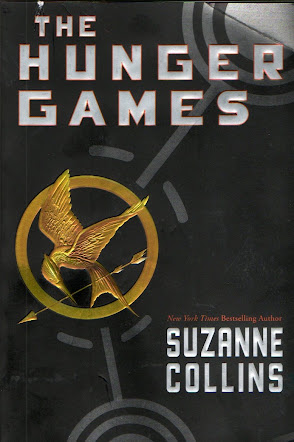 The hunger games by Suzanne Collins

The hunger games has been very well received ever since it came out. There are another two books as well, and the first film has been adapted into a film which will be out soon. But to be honest, I don’t see what all the praise is about. This isn’t a bad book, not by any stretch of the imagination, and the story is well told. The characters are interesting, Katniss is a good protagonist. But overall it is an average enough book. And, imo, it is let down by the love-triangle aspect.

This next part is not hugely specifically spoilery, but it is in terms of plot so I’m going to hide it, just in case. Show Spoiler ▼

Katniss has a best friend you see. And while there is nothing romantic between them it is hinted that this might develop if herself and Gale were left to grow up. But, once she becomes a participant in The hunger games that changes. The other teenager from her district is Peeta. He is from a relatively well-off part of District 12, although that means very little. And it turns out that he has always had a crush on Katniss. And to survive they begin to work together and pretend that they are in love. It’ll gain them ratings and sponsors and a better chance at survival. But of course it isn’t all pretence. Peeta really does love Katniss, and maybe she really loves him back? But at the end (okay, this is spoilerific) they both survive and win, and at the very end they head for home, with Katniss worried about what Gale will think. Urgh…

Love triangles. I just hate them. But maybe that is just me and my being all old and stuff. And this is aimed at teenagers, so maybe they think that’s fascinating. WHo knows with young peoples these days ;)

So I liked it. I didn’t love it, and parts of it annoyed me. I will however be reading the others in the trilogy. So that should tell you that I enjoyed it enough, or maybe wasn’t annoyed enough. And I know the whole of the book isn’t about the love triangle aspect, but I don’t know, it just felt as though having that made the book less. It disimproved the book. And, again, totally imo, it made Katniss less of a great character.