Billy Beane is general manager of the Oakland As, and they have just lost the final game of the season. Again. And they are losing their best players. Teams with more money can always buy in talent, but for those operating under a tight budget baseball is an unfair game. His team of scouts bring names to his attention, potential replacements, but Beane thinks they need a new way of operating. Their problem is not that they are losing talent but that they have no money. While negotiating possible transfers he runs into Peter Brand, an economics graduate, who has looked the players and their stats and has come up with a new way of analysing who is needed and who is overpriced. 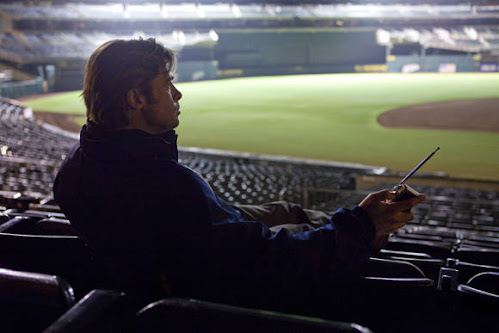 This is based on a true story, as detailed in Michael Lewis’ book Moneyball : The Art of Winning an Unfair Game. I however no nothing about the true story. Hell, I know nothing about baseball either. Still, I have to say that this was a really good film. Well, it was a good solid film while I was watching it. A tad slow in places, and overlong as well, but still, entertaining. Once the film was over though, well, it was a pretty forgettable drama story. Maybe if I was more invested in the sport it may have stuck with me more.

I did think that Pitt was excellent in the role, and Hill was pretty good, but it is Beane’s story and so it all centres around Pitt. Everyone else is just a supporting character. Overall I have to say that all the talk about an Oscar is more than a little ott, but if you have some time to kill, and some money you need to spend then there are worse way to spend your time.

Other reviews: Cut print review ; Confessions of a film critic