Set in the same ‘verse as Doomsday Book and To say nothing of the dog this is a book about historians. But not the sort of historian you or I might be familiar with, but one who actually travels through time and investigates the past in person. Mr Dunworthy’s time travel department in Oxford is having a spot of bother. Schedules are being changed and moved about all other place. This does not please the historians, especially those like Michael who have just been implanted with American accents in preparation for heading to Pearl Harbour and are not, instead, heading to Dover. But they’ll still travel, because it is the only timetable open to them. 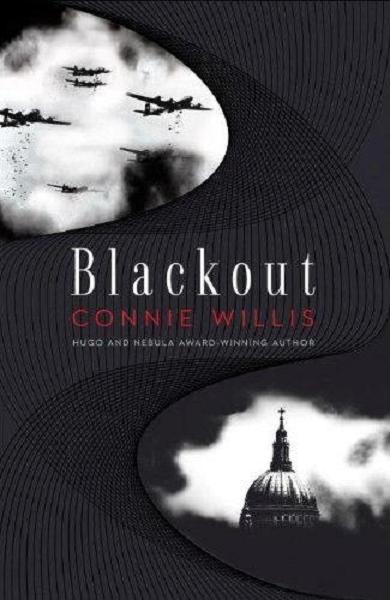 The story in Blackout is told from a variety of perspectives, all studying World War II. Polly is in London researching the blitz spirit. Eileen is in the countryside looking at the evacuee situation, and Mike should be studying the ordinary heroes of Dunkirk.

To be honest, at first I wasn’t really gripped by any of the storylines. But I gradually got hooked and in the end I did enjoy the book. Only of course it isn’t finished. This book was published in two volumes and so I must go look for All clear now and find out what has happened to everyone.

If you pay attention to my genre labels you’ll see that I’ve called this one sff & historical fiction. technically I suppose if should just be sff, but there is so much details about the lives of people during the war that I do think that historical fiction fans who like that period should give this a go. You can always put it down if you don’t like it.

As I said, I did *get* to like this book, and enjoy it, but at the same time I’m not sure quite why it won so many awards. It is good, but not great. Does that mean the competition wasn’t up to much? or is it just that part two will really wow me?

If you’ve read Connie Willis before then you’ll know the sort of book this is. If you haven’t, I’d recommend you start with Doomsday book as it is the first of her novels in this ‘verse. There is also a short story, Fire Watch, but I haven’t read that yet. You can jump straight into this one without reading the others, but it will help to introduce terms and concepts like slippage and drops and the like.

Other reviews: Rhapsody in books ; I’m booking it ; Semicolon