Written in 1972 this is the story of Miyax, whose English name is Julie, and her attempt to run away to San Fransicso. When the story begins she is alone in the wilderness. A nearby wolf-pack give her hope that maybe she can survive and she attempts to communicate with them. Initially they prove disinterested in her, but gradually some of the wolf pups come to investigate her and so she learns their language of gesture, as well as barks and howls. 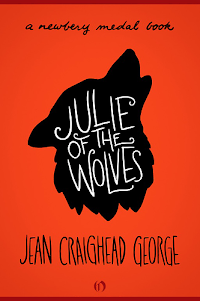 Julie of the Wolves by Jean Craighead George

But I’m getting ahead of myself.

I really enjoyed this, as I said it is simply written and there are some errors about wolf behaviour, but at the same time there is so much to learn from this book. George obviously did her research on the Inuit people and their traditional ways of surviving in the Alaskan wilderness. It is also clear from the book that she is deeply interested in the natural world. It comes across so well.

I’ve never read anything by her before, but I understand that she is on reading lists in the states, so maybe some of you from the US are familiar with her and her books? I think this is one I would have loved to have read as a child. I always devoured the animal books whenever we visited the library, this would have been all the more entertaining and interesting because it has a is the story of a girl surviving in the wilds. And even now, all grown up (supposedly) I still really enjoyed it. Miyax is resilient and resourceful. And I loved her mantra to help her stop giving into fear and panic; that she must be doing something wrong so change something and try again. Words of wisdom.

Some of it is told in flashbacks, how and why Miyax left her home, and her “husband” for example, as well as her much earlier life with her father and the values he taught her. But by throwing us right into the wilderness with Miyax at the beginning of the novel we as readers are forced into trying to discover a method of survival alongside Miyax. There are also two sequels to this, so I must keep an eye out for them as I’d love to know how Miyax got on.