I watch The Dog Whisperer, and while I enjoy it I’m often put off by Milan’s insistence that the dog wants to be the dominate one of the partnership. And the whole alpha dog thing, it just doesn’t sit well with me. Okay, so I don’t have a huge amount of experience with dogs. Growing up as a kid we got our first when I was ten or so. Our second dog we only had a few months before he was hit by a car. After our collie was put down we got our current family pet, he is coming up on 11 years old now. And we’ve never had the whole dominance issue. 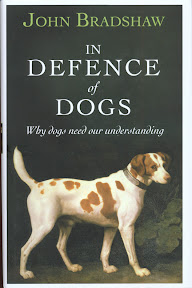 In defence of dogs - John Bradshaw

So maybe I was predisposed to like this book and its message, that dogs have evolved to live along side us and are not wolves in dogs clothing awaiting their chance to leap and take control of the household.

Bradshaw starts with the wolf and the belief that dog behaviour can be explained through studying the wolf. First of all Bradshaw points out that dogs and grey wolves share a common ancestor. That the wolf has continued to evolve, as has the dog. Wolves have become ever more shy and wary while dogs have been selected for their ability to get on alongside humans.

Bradshaw isn’t writing as a dog trainer however. He is writing about dogs as animals and how they fit into society. And how society has failed them. Pedigree breeding anyone?

It’s strange, a lot of what Bradshaw had to same seemed to confirm stuff I had thought, but never been able to explain why. I knew, for instance, that the idea of a wolf pack as being this group of animals constantly vying for top spot and warring internally wasn’t true. Modern research has shown that the wolf pack is a family, and while their may be occasional conflicts the top pair does not enforce their rule through violence. It is simply that, in most cases, they are the parents of the rest, and so the other animals grow up accustomed to doing what the others say. If they object, they leave. Not an option wolves in captivity have, and so studying captive wolf packs has given people a misguided impression of wolves.

Full of fascinating examples and well written, if you are interested in dogs you should take a look at this book.