I really wish that I had gone back and reread the previous book in this series before starting this. The language of bees is the ninth in the series, but it was the first that I read, I then went back and reread from the start, skipping this because it was checked out of the library and I haven’t gotten around to buying them all yet. But I should have waited, because this starts off right where language left off, so it took me a while to catch up on exactly what was going on.

Holmes & Russell are separated; both wanted by the police and there is also an arrest warrant out for Holmes’ son Damien. And then there is the fact that Mycroft Holmes himself was questioned by Scotland Yard. Unthinkable! 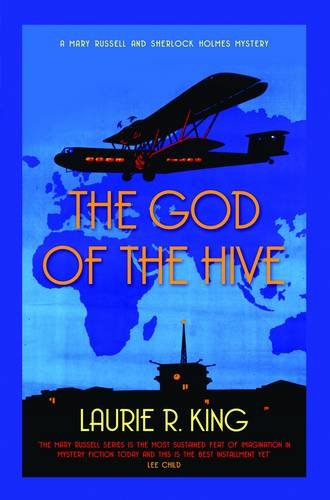 ISBN: 9780749008475This was a very fast paced book, and there is plenty to keep the reader’s attention. Unlike previous books in the series which are mainly from Russell’s POV this one has multiple points of view, so we know what is happening to characters who aren’t interacting directly with Russell. We often know what she does not.

Overall this was a really enjoyable mystery read. And I found the hints about Mycroft and the whole intelligence game very interesting. Especially the fact that he signs his official documents only with his first initial, M. Remind you of any one?

Other reviews: Bride of the book god ; Shelf love ; Inside a dog ; Window Seat Reader ;