Strangers never walk down this road the sisters thought in unison as the man trudged towards them.

I finally got around to picking my first read for this year’s Readers Imbibing Peril challenge. I am aiming to complete the first Peril:

Read four books, any length, that you feel fits my very broad definition of scary. It could be Stephen King or Sir Arthur Conan Doyle, Ian Fleming or Edgar Allan Poe…or anyone in between.

but I may mix a bit of the final peril in too and watch me some scary films.

Sisters Red is the story of two sisters, Scarlett and Rosie, one day, while walking home they encountered a stranger upon the path. A stranger who followed them to their grandmother’s house, and although he seemed pleasant enough at first, it soon turned out that he wasn’t very nice at all. Ever since that day Scarlett and Rosie have been among the few who know about the existence of the Fenris, or werewolves among us. They live in packs and kill and mutilate for fun. But Scarlett is an expert hunter. And Rosie isn’t too far behind. 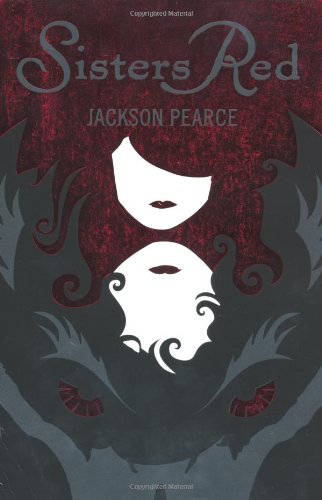 The reason I first picked this book up was because of that cover. It is just cool, go on, take a second and look at it. I’m not going anywhere.

It is by Strawberry Luna and I think I’ll have to take a longer look around that site, just to see if there are any other goodies about.

Back to the story though…
Hmmm, I quite enjoyed this book, although I didn’t love it. I liked the interaction between the two sisters, although I felt that some of the conflict seemed a bit forced and shoe-horned in. But I love some of the descriptions of Scarlett’s feelings as she watches her sister begin to live a life outside hunting and werewolves. A life that she can never see for herself. It is this perfect mix of yearning and jealousy and envy.

Everything about them is silky and gleaming, all smooth skin and shiny hair and languid voices. I can feel the scars on my body more than ever before, thick ropes working to strangle me.

There are some pieces of lovely writing in this book, but at the same time there are also some very forced and strained bits. Scarlett’s naming of the “pretty city girls” as Dreagonflies really didn’t work for me. So bits were good, and bits weren’t, but overall it was enjoyable enough. There may be sequels, so I guess I’ll find out then if I really enjoyed this or not by how quickly I pick them up :)

Other reviews: The Happy Nappy Bookseller ; The library lurker ; The compulsive reader