Okay, so for those of you who have been wise enough to avoid all the Twilight nonsense, here is a quick catch-you-up; a young girl called Bella moves to live with her father after her mother remarries in order to give the new relationship space. This is a sign of how mature and thinking of others she is. Her father lives in Forks, the rainiest place in the US. This is important, so remember that fact, Forks is rainy and cloudy. At school Bella reveals herself as a clutz and a clumsy moron, but supposedly the boys all suddenly find her irresistible. But she only reciprocates for one boy, Edward is part of a clique that keeps separate from the others. All part of the same family, but adopted or something, the Cullens are just gorgeous and lovely and stand-offish and beautiful and pale and graceful and marvellous and admired by everyone. But whenever it is a sunny day they don’t seem to come to school. The reason, you see, is that they are vampires! And when the sun shines they sparkle. Yes, they sparkle in the sunlight. 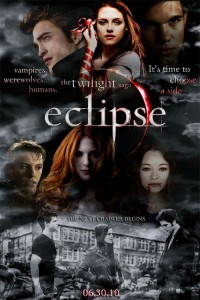 Romance ensues. Bella and Edward are sooo meant to be. Meant to be so much that Edward will break into her house and watch her sleep. So much so that he’ll protect her by lying to her. He loves her so much that he wants to lock her up and keep her safe and never ever ever have sex with her! Or something.

Oh, there are also werewolves. The local Native American tribe have certain members who can shape-shift into werewolves, and one of these also loves Bella. And hates vampires. And so epic war breaks out… oh, no actually that didn’t happen.

I’m sure something happened in this film. Oh, there was a god-awful looking ring as Bella and Edward got engaged in the most lacking-in-romance-scene ever. And, erm, there was a battle with other vampires with no danger and no tension and no blood-shed, on account of vampires shattering like plaster. Which is a really great idea! not.

Of course if only Bella got together with both Edward and Jacob then everything would have been sorted a long time ago. Or is that more Laurel K Hamilton rather than Meyer-esque.

Tags: based on bookbored-nowboy meets girlcrapEclipsemake it stop oh god why did I do this to myself!mwahahaR-12Areleased 2010sThe twilight sagaTwilightvampireswerewolves