It was a time of darkness where the cities of the damned were stacked high with the bones of fallen heroes.
–Joe Kelly - I kill giants (Titan ed) - c.2010 - pg1

Barbara Thorson doesn’t need career day. She already has a career, that of giant-killer. She tells her teacher and class this fact, for some reason they don’t believe her. She’s regarded as a freak. And is friendless as school, until a new girl shows up while Barbara is out setting giant traps. They slowly become friends, but things don’t really improve for Barbara. Her father is absent. Her sister out at work all day, and then stressed, and a bad cook. And her mother…

Well, to say any more would be to spoil the plot, so I won’t. 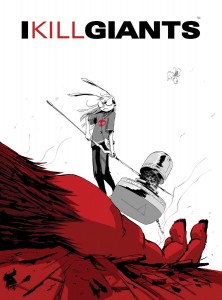 This is just a wonderful read. The story is simply and effectively told. The art work is, likewise, simple and effective. Black and white with shades of grey is all that is needed here as Niimura brings Kelly’s words to life. His version of Barbara is brilliant, with her strange hats or animals ears. And while I normally like colour in my graphic novels, in this case it isn’t really needed. It’s just beautiful the way it is done.

The whole book is beautiful. And just heart-breaking. But I can’t say anything about that, because, you know spoilers! but seriously, go check this out. If you don’t love it, well, I don’t know what to say to you!

Other reviews: Things mean a lot ; Reading list of a book pusher ; the fiction house (slightly spoilerific) ; Boarding in my forties ; The Zen Leaf

RT @tweetymonkey There is nothing funny about this tbh. Hey @gardainfo do you think something should be done about this? pic.twitter.com/EkjSMUxF0B