You know, I’ve been reading this series since I was in second year in school. Thats what, 1992? ’92 or ’93. Whichever it was, that is a long time to be reading the same story. But I don’t regret a second. Not even the incredible feeling of disappointment after book 10 when I shrieked that “nothing happened”. Because it is a great story, with great characters, and I really do want to get to the end and find out what happens. 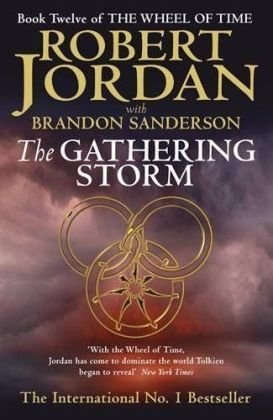 And when I heard that RJ was sick a few years back it seemed like that might never happen. And in 2007 he passed away; and although I felt bad for him and his family I really couldn’t help the selfish thought that crept into my mind, that he’d never get to finish WOT. I suppose in a way it is a compliment to his world & character building skills.

Of course RJ had known that this might happen, and even dealing with his own illness and everything that must have entailed for him and his family he still thought about his fans and readers, and he asked his wife, Harriet to find someone to carry on the books and finish the story. Brandon Sanderson was the writer she chose, and I have to say that he has done a pretty good job. He doesn’t try to imitate Jordan’s style, he tells the story in his own way. The biggest difference, imo, is that Jordan comes across as having a much smoother style. Sanderson’s seems rougher, and more repetitive. I distinctly noticed the same point being made a couple of times in the book, and in a very similar manner. Jordan handled things like that very well. He made sure you noticed the important things but never bashed you over the head with them, and that’s what it feels like, on occasion, with this book.

Overall though I did enjoy the book. Loads happens. And at the same time not enough. I stayed up way too late reading it so I could finish it, but once I’d finished I wished that I hadn’t rushed it. Although in saying that maybe too much happens in certain chapters. Certain things seemed to be thrown in to whack you into wtf!-ness and then the book all too quickly moves on. But maybe that’s what has to happen in order to finish the series off. Otherwise we might be here in another 20 years still wondering how the story will end.

The other gripe I have is that some characters feel different. It’s understandable. Sanderson is bringing his understanding of them to life. And while it might feel the same to him there are bits and pieces that just don’t ring true for me. Mat especially I think. He’s almost right, so close, but it just doesn’t seem exactly like him. Of course maybe that is character development ;)

I am tempted to start a reread straight away but I’m not going to. We’ve been promised a book a year, and presumably the pbk version of this will be out in a couple of months. I’ll reread it when I buy my copy.

LibraryThing ; Some of the many many reviews