Liga’s father fiddled with the fire, fiddled and fiddled. Then he stood up, very suddenly.

I’ve been wanting to read this book for a while. It’s been stirring up quite a bit of controversy, what with its storyline involving rape, abortion, and incest, although none of that is the reason why I wanted to read it. I’ve really enjoyed what I’ve read by Lanagan up til now so I knew I’d get around to this one sooner or later. And I’m glad I did, as I did enjoy this one too. Not all of it, but it isn’t all meant to be enjoyed. 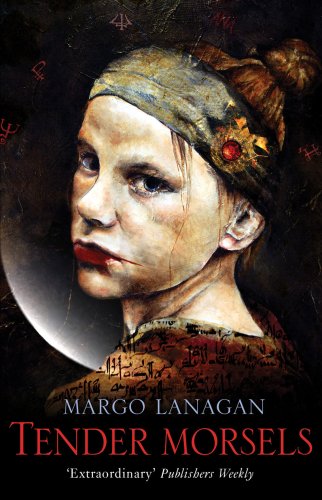 I will say that I love Lanagan’s style of writing. She creates wonderful worlds and atmospheres with her descriptions. But, in this case, I did have a slight issue with the characters. I didn’t like any of them. Apart from Bear, the noble bear that is :) Him I liked. But in the final third I felt the girls became more real. Liga too. After the horrors of the beginning and the dampened emotions of the mid-section I think that Liga grew into a more real character. Which I suppose is the point, and so something I should appreciate.

There is a lot of “objectionable” matter in this book, but it is never graphically described. It isn’t avoided either, or hidden away, in fact Lanagan does a great job of letting you know exactly what is going on without ever being overly explicit.

But I’m conflicted about how I feel about this book. I want to love it, because there are parts of it that are simply wonderful. I loved the little moments that seem just so truthful, especially the scene between the husband and wife, Davitt and Todda, talking in bed in the darkness. It was a small moment, but to me it was just perfect.

Despite not absolutely loving this book I think it is one that I’ll reread and most likely love more with each reading.

Other reviews: Neth Space ; the thinkings of a lili ; Books and other thoughts ; Things mean a lot ; SFX interview
Margo Lanagan tagged sites