Was Sat ever a day of rugby or what? I missed the first match cause was taking the sister shopping for her birthday, but bloody hell. The two matches I caught were entertainment enough.

Weirdly, I’m starting to feel some sympathy for Gavin Henson. Thought all the criticism he got during and after the Wales/Ireland match was hugely unfair. You can hardly expect someone who hadn’t played properly in an age to come on at international level and do well. And that’s leaving aside the ructions going on in the Wales camp as it was.

But in the end France did the expected and won. Which meant that, realistically, all we were playing for was second place. Oh yeah, and the little matter of the Triple Crown, and beating England of course.

Everyone said that we needed a good start. That England were fragile, and if we, well, you know, gave them a kicking while they were down they might not make it up again in time for the match. But what did we get? A try. An english try.

Fucking hell. What a shit way to start a match. Almost as bad as against France. 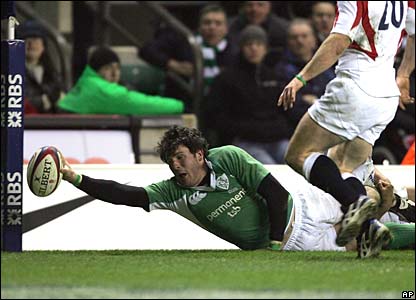 But then Horgan became mighty as he did the impossible, he scored after the ball touched the line. Yes, it was out. So the English can feel them selves unlucky, but as the man himself said you have to play the whistle. And Ireland have had plenty of call like that go against them in the past. Swings and roundabouts.

Not to mention that there was something funny going on in that scrum, given Flannery’s “thats the second fucking time” outburst. And the fact that more than a few of the papers today were reporting that he needed treatment to his eyes.

But in the end we won. And I think we deserved it. I’m biased, but I don’t care.

You should have heard the screams in the front room of the house in Sligo. De mudder kept saying she’d have to leave. The tension was getting to her.

And I really think that this year we had one of the most entertaining Six Nations in a long time. Okay, so there were no great matches. No exhibitions of flowing skillfull rugby, but we did have some great competitions. Tensions and uncertainty everywhere. No one was safe as Italy almost beat some of the bigger teams. As Wales crashed from the heights of their grand slam last year, and as Scotland came from nowhere to win some great matches.

Here’s hoping next year will be as good.