There is no doubting his footballing genius. Just take a look at this compilation from the BBC. But there also is the other side, the drink that killed him. And recently it seems as though people only seem willing to look at one or the other aspect of his life.But does the fact that Best was an alcoholic make him any less a footballing hero? I don’t think so.

Born in Belfast in 1946 Best was discovered by a Man Utd scout when he was only 15. There were doubts because of his slight build and size, but his skills meant that in his 466 caps for Man U he scored 178 goals.

* Football League Championship winners medal, 1965 & 1967
* UEFA European Cup winners medal, 1968
* British & European footballer of the Year trophy, 1968
* Football Writers Association player of the year, 1968
* Holds the record for the most goals by a United player in a single match, six versus Northampton Town, FA Cup fifth round on Feb 8 1970. United won the match 8-2. 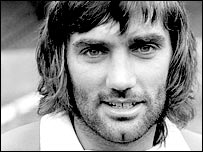 “He had the lot: balance, pace, two good feet, he was brave, strong and a good header of the ball. Pele wasn’t as gifted as George Best and I would definitely put George above Johan Cruyff because he had more heart,” so said Johnny Giles

The edited bit:
I caught quite a bit of the coverage of the funeral today. Was on almost every second station. Now I’ve seen quite a bit on the blogosphere saying that this is another Diana moment, that the public is gorging itself on grief, now maybe that is what happening elsewhere, but here in Ireland I haven’t really noticed any excessive grieving. Yes George Best’s funeral is being covered in the media, and people are talking about him, but it is much more a celebration of who he was.

The coverage of the funeral showed plenty of crowd scenes, and over the past week we have seen so many tributes at football matches. And I haven’t seen any of the weeping and wailing that was so evident at the time of Diana’s death. Obviously, there is a huge difference in how they died, etc, but I cannot see any of the “gorging on grief” some people see. Instead of minute silences many football grounds had applause, cheering George’s memory.

What the general public are doing has really very little to do with grief as such. Yes there is sorrow, but more to do with how gifted and skilled he was, and that people are remembering the talent they saw.

Lets not forget that for many people football is life. And Best was the best. Not only that, but in Northern Ireland he was something even more special. Someone who showed that there was more to NI than violence and troubles, and someone who seemed to suggest that there was no divide at all. Did anyone care which community George came from? I don’t think so, just that he was from Northern Ireland.

At the moment Sky News are having a little discussion with friends of Best’s, and they are all laughing and joking, a fond remembrance rather than any excessive grieving.

Although the main Sky News was has just referred to Britain as “the mainland”. Bint!

And in totally unrelated news, tÃ¡ mÃ© ag updating mo blogroll[1] an in the process came across UI’s How Irish are you quiz. Go on and take it, sure you might as well, like.

You’re Irish to the core! Go on ya good thing!

UI’s Irishness Test
brought to you by Quizilla