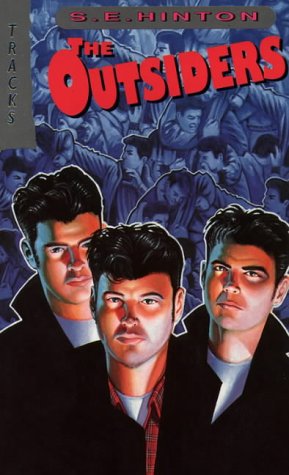 ISBN: 0006722253
I decided to reread this after hearing that the film has been recut and rereleased.

The Outsiders is one of those classic YA books. Although I never read it at school I think it might be on one of the optional reading lists.

The story revolves around Ponyboy, he tells the story, the first person narrator so everything is through his eyes. The eyes of a greaser. Greasers are lower-class Oklahoma youths, so called because of their pride in their long greasy hair. Their natural enemies are the Socs, or upper-class, wealthy Socials.

Ponyboy is the youngest of three brothers, and as his parents died a few years earlier there are tensions between him and his oldest brother, Darry, who has been forced to give up college and work to support the family.

Written when Hinton was only 17 there are certain elements that stand out as slightly immature, although you could say that is because it is Ponyboy telling the story. And he is far from mature, he is only 14 after all.

I read this ages ago, and it remains a very readable book, despite the fact that I can see many more flaws in it this time round. Still the story is enjoyable and while some characters may lack a certain depth, they have enough to keep you interested.

Tags: 1001 Children's Books You Must Read Before You Grow UpALA - frequently challenged bookclassiccoming of agegangsprejudiceThe Outsiders