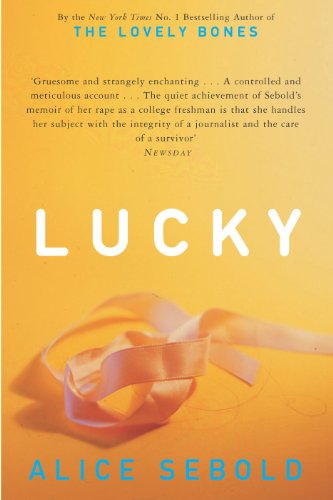 ISBN: 033041836x
At its most basic this book can be classified as a rape memoir, and why would anyone want to read anything like that? Not for entertainment, thats certain. Lucky starts off with an account of Sebold’s rape, all the details are there. No shying away from the truths.

But this book is not a victim venting, although there are elements of that. Rather it deals with the impact that this one night had on Sebold. On her friends, her family. Even how strangers react once they know what happened to her. How she almost loses a sense of who she is, becoming instead “;the girl who was raped.”

Details of the court case, from her picking out the wrong man in the line out. What she wore, how minor details affected the case. Nothing is left out. And so, reading her story you realise that the rape itself isn’t the only problem. It is the aftermath. The living in fear, in a constant state of readiness. A sort of post traumatic shock.

Incredibly well written, and hard to put down this is well worth picking up.